The tournament has been creating a real buzz with golfing enthusiasts across the globe, and we are delighted that it has been featured in Golf Canada Magazine!

As most of you will know, there are many people descended from Scots living in Canada today. In fact, according to the Education Scotland website, an incredible 4.7 million Canadians said that they were of Scottish origin in 2006, and at that time, the entire population of Scotland was just under 5.2 million!

Golf Canada, the governing body of golf in Canada, represents more than 350, 000 members across the country and is also in charge of the decision making for the rules of golf, handicaps and course ratings for over 1,600 courses in the country.

Enclosed in the advert, which you can view below, is a description of where the event will take place, including Kingsbarns and host of the 2014 Ryder Cup; The PGA Centenary Course at Gleneagles.

As the advert explains, participants and their families will enjoy some of the finest examples of Scotland’s heritage, culture, cuisine and hospitality. 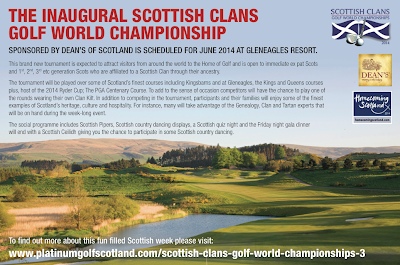 For more information on the Dean’s Scottish Clans Golf World Championship, please visit www.platinumgolfscotland.com, e-mail enquiries@platinumgolfscotland.com or call +44 (0) 1382 477552.If you want to book your place at the Dean’s Scottish Clans Golf World Championship, you can complete the Booking Form on the Platinum Golf Scotland website.If you want to keep up to date with the championships, make sure you ‘like’ the Dean’s Facebook page and follow us on Twitter.
If you have found this post interesting, please share it with your online community, using either the Twitter, Facebook or share buttons below. Thank You.
[shareaholic app="share_buttons" id="24709883"]