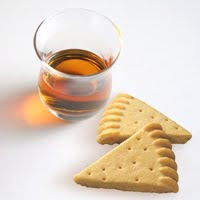 We have always known that Dean’s Shortbread tastes heavenly, but now we know exactly why.

The ‘Angels’ Share’, as it is commonly known, is the process whereby angels take around a 2% share of whisky during the maturation process.

At Dean’s, we often wondered what angels eat to accompany their whisky – and we have finally discovered that they have been taking a share of our shortbread!  (Up to 10% of our ingredients ‘evaporate’ during our baking process)

Just as it was in Helen’s kitchen in 1975, Dean’s shortbread is made using traditional production methods and a slow baking process.

And it is during this honoured, handcrafted baking process that those sleekit angels have been taking their share.

Today at Dean’s our hand-baking process is just the same as Helen’s but on a larger scale. Here’s how it’s done.

With that smell and distinctive ‘melt in the mouth’ taste, can we really begrudge the angels their share?

Some people say that all great whiskeys have some kind of magic to them, and we think the same can be said for shortbread.

Now that we think about it – who’s to say that magic doesn’t come from the angels?