The origins of shortbread... - Dean's Shortbread - Original family recipes • Melt in the mouth Shortbread - Baked by hand
ONLINE CUSTOMERS PLEASE NOTE that we cannot accept requests for specific delivery dates and that all orders will be processed and despatched within 7 to 10 days 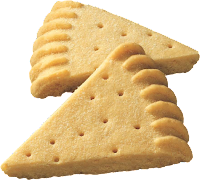 The origins of shortbread can be traced back to about the 12th Century when butter or lard was added to bread dough, thus the name shortbread. It was not until the 17th Century when sugar was introduced to the UK that it became more of a sweet biscuit, as we know it today. It probably had the same derivations as the American ‘shortnin bread’ or ‘shortcake’, which uses fat or shortening in the recipe.

Early shortbreads had decorations added to them such as caraway seeds, lemon peel and nuts. These decorations appear to have died out in today’s shortbreads and it is the flavour of the butter and its cooking methods that give the product its distinctive characteristics.

Shortbread in the past was used mainly for festive occasions such as weddings and at Hogmanay, (New Year) where they were made into large round bannocks or rectangles, then broken into even chunks and served on an ashet.

It was once a “brides cake” baked by the brides mother. A tradition with the shortbread was to break it over the head of the bride, as she crossed the threshold of her new home – if it broke into small pieces, the marriage would be fruitful.

It was the shape of the frills on the dresses of the Edinburgh ladies who were having shortbread for their court afternoon teas, that the name petticoat tails was derived. 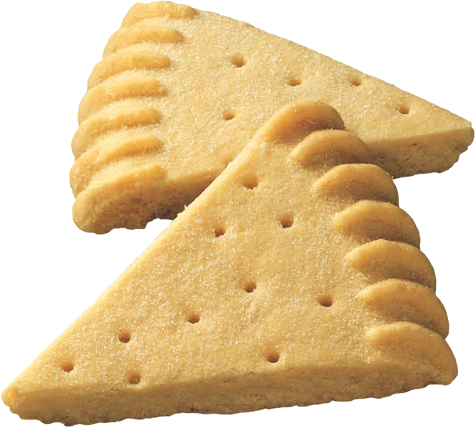 Shortbread today is as popular as ever, with the demand coming not only from its use as an everyday delight with a cup of tea or coffee, but as a gift from Scotland for the ever hungry tourists who buy the product each year by the thousands of tons.