The Wonders of Wi-Fi...... - Dean's Shortbread - Original family recipes • Melt in the mouth Shortbread - Baked by hand
ONLINE CUSTOMERS PLEASE NOTE that we cannot accept requests for specific delivery dates and that all orders will be processed and despatched within 7 to 10 days

Not just popular with business people who can catch up with emails in comfort over a quick coffee, but it has also proven to be a hit for our many Facebook followers who can check-in, and take the opportunity to compliment us on our delicious scones or homemade soup!

Last week, we were delighted to meet Derek Flory in the cafe bistro when he popped in for lunch with his wife Caroline, sister Evelyn and his mother Sybil.

While they waited for their lunch to be served they took the opportunity to connect with family in Singapore via Skype on Derek’s ipad – how nice to be able to see and chat with your nearest and dearest on the other side of the world, while you wait for your fish and chips to arrive! 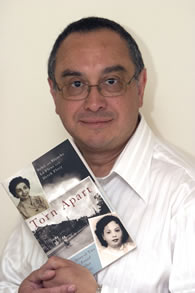 Some of you may already know of Derek Flory and his mother Sybil.

In 2008, Derek published a book ‘Torn Apart‘ telling the remarkable story of Sybil and her sister Blanche.

The two sisters were brought up in Burma in the 1920s and 30s, however during the Japanese bombing of Rangoon in December 1941, Sybil was forced to flee the city, ending up in India and then later in Scotland after marrying a Scottish soldier.

Sybil had always been extremely close to her sister Blanche, but amid the carnage of Rangoon from where she fled, she never discovered if her sister had survived the devastating bomb attack.

Sybil and her husband Reid Flory settled eventually in Huntly, Aberdeenshire, where they raised their family and ran their pharmacy business, however Sybil never forgot her dear sister Blanche and often wondered what had become of her.

Unknown to Sybil though, Blanche had indeed survived the bomb attack, and later settled with her family in Calcutta, India.  Incredibly, it was to be 2007 before the two sisters were reunited, 65 years after that fateful day in Rangoon.

Derek has done a marvellous job of telling the story of his mother and her sister and how their reunion came about, and we would highly recommend ‘Torn Apart‘ – a very moving and uplifting account.

It was great to meet the family in our cafe bistro, and to chat with Sybil, such a remarkable lady with an incredible life story, and looking so well and so happy at the wonderful age of 92.

Click on the link to Derek’s website to find out more about ‘Torn Apart‘, a definite ‘must read’ !

It's #NationalTeaDay which means it's time for tea