They’ve done it and we’re very proud of them…
Posted Friday, August 5 2011 by Categories: Uncategorized

You will see from the JustGiving counter on the right of this post that we have passed our £5000 target in fact, at the time of writing this post we are standing at £5661 raised. This is due in no small way all of you who have donated to the appeal.  Of course, you may not have been compelled to donate if it wasn’t for the efforts of the Dean’s Activ8 Team and the magnificent effort they all put in to completing the exhausting Glencoe Mountain Challenge, we are very proud of each and every one of them – Norman, Jennifer, Siobhan, Elaine, Les, Heather, Amanda & Arnoldas.

We were delighted to see the whole team back at Dean’s this week and to receive the following report about the step-by-step progress of the Team: 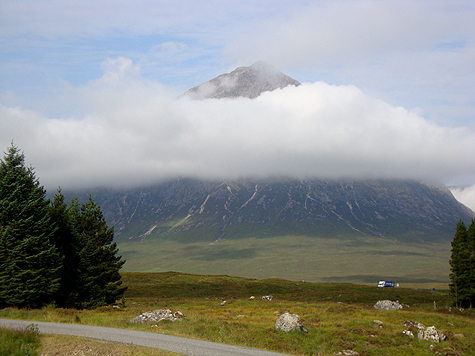 Well on Saturday morning (30th July), at approximately 09:00hrs the Dean’s Activ8 team set off from the King’s House Hotel in Glencoe . It was a glorious morning with very little wind and ample sunshine.

The first hour took us along Glencoe parallel to the main road before we arrived at the base of the Devil’s Staircase!!! By this time the sun was getting warm and as we all started our ascent it became all too apparent that this would be a hard climb and we’d only just started! 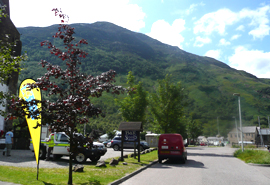 We kept a steady pace and stopped periodically to enjoy the view (ok we stopped to catch our breath and had a look around whilst doing so!) and take in some fluids. I guess it took us around 30 – 45 minutes to summit the staircase and we were rewarded by some incredible views (after we wiped the perspiration from our eyes). We had a ten minute break to eat some high energy food and drink some more before heading off again towards our first formal stop. The walk in to Kinlochleven was stunning with mountains all around us and we were very happy to reach the Ice Factor (lunch stop) in around 3hrs 20min’s. The team quickly tucked into some soup and rolls as well as filling up our water bottles before setting off on the second leg of the challenge. We had covered 9 miles at this stage. 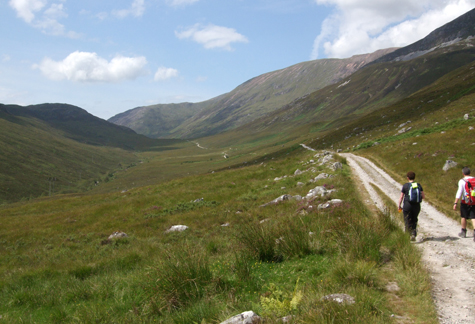 Now as we walked through Kinlochleven, to pick up the west highland way at the other side of town, we were all buzzing with anticipation having done so well on the first section. The euphoria was short lived however as we crossed the main road and walked onto the path we needed to follow only to see a very steep climb in front of us!! A well kept secret we decided to call it “The Devil’s Stairmaster” and boy what a climb it was! The sun was burning hot overhead as it was now between 1 and 2pm, pretty much the hottest part of the day. When we reached the top we had all, more or less, consumed one half of our water rations for the second leg but still had more than 7 miles to go until the next stop!

This section was very tough and the team were all badly in need of water by the time we reached the rest stop. Not only this but the aches and pains were beginning to show up making it more difficult for every mile completed.

We departed the second / last stop around 16:15hrs and had been walking for more than seven hours by this point. We had now covered 18 miles. 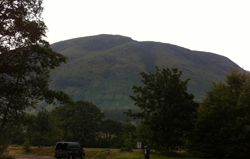 The sun was still merrily shining on our backs, as it had been for most of the day, and was relentless in its contribution to making the challenge even harder, at least we were compensated a little in the views that it also provided of the surrounding landscape.

The final five miles started with yet another climb but this time it was not as severe. The fact that our legs were beginning to tire made even short climbs punishing as we forged on towards the mighty Ben Nevis. 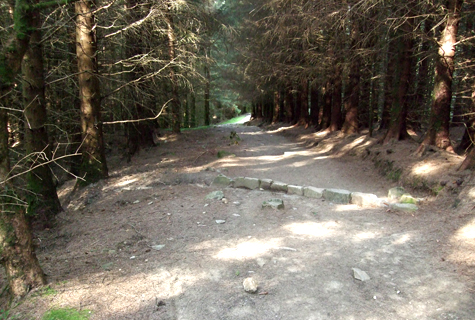 At last we started to enter some forested areas where we found respite from the heat of the sun, this was most welcome as we were now some 20 miles into the challenge. We stopped briefly in some woodland where we could see Ben Nevis before setting out for the finish line.

The last couple of miles were almost surreal as we all went into a kind of autopilot to make it to the end. Painful hips, knees and blistered feet were now the order of the day and these were nicely complimented by a smidge of sunburn (we regularly applied cream but the heat meant we were sweating it off almost as quickly as it went on!) and a nice helping of midge bites! Around the 21 mile mark there was another couple of short climbs and these made our leg muscles burn more than ever as we were getting very tired. The last one and a half miles were mostly downhill but this wasn’t necessarily good news as several team members were experiencing real pain in their knees and hips which was much worse when going down hills. 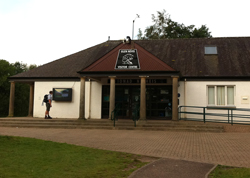 At last we came off the mountain side onto the main Fort William road, crossing this about 300 meters along, into the Glen Nevis Visitor Centre.

As if to make things just a little harder the finish line was at the far side of the car park but the last few hundred meters to reach it were probably the easiest, as we all knew we had completed the challenge and raised over £5,500 for Marie Curie in the process. 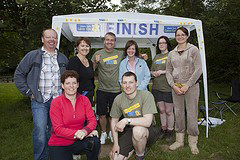 Every member of the team completed the walk and we would all like to thank everyone who sponsored us for their generous donations.

We would especially like to thank Shearer’s for providing the team bus, not only did they do this but they also insisted that we did not refill the fuel tank but instead put a little more into the collection, fantastic!

A special thanks goes to Eddie Ingram for being our “limo driver” for the day, top job Eddie. This allowed the team the luxury of not having to drive too soon after the challenge. He also provided us with ice cold Champagne, beer and water at the end of the day, something the team thoroughly enjoyed.

Our thanks also go to Craigdon Mountain Sports in Inverurie who provided us with a handsome discount on any equipment we purchased and to Cotswold Outdoor in Aberdeen for a similar arrangement.

We would also like to thank Dean’s who have contributed much during the lead up to the challenge, including shortbread for the boot sale and product for the Marie Curie tea parties.

Finally my thanks go to the team, who endured many and numerous aches and pains, not to mention the vampire like, relentless attentions of the world famous Midges! You each made the challenge very worthwhile and a great success, thank you very much indeed.

Thanks for taking the time to read our blog, for and on behalf of Dean’s Activ8. There’s still time to make a donation to the appeal by using the JustGiving button below.